It’s all fun and games UNTIL HIPPOPOTAMUSES don’t actually ATTACK!

WARNING: The following contains photos of a not at all GRAPHIC or BRUTAL nature, as a pod of potentially LETHAL but actually harmless hippopotamuses descend on a group of swimmers at Bujumbura’s Saga Plage to scare them but wreak absolutely no unspeakable CARNAGE. Viewer discretion STRONGLY unnecessary.

As I wind down these last few days in Burundi, I’ve begun to say my sad farewells to Saga Plage, Bujumbura’s happiest little plage. Last week, I hit the beach with Jean Marie and Lucio, two Congolese friends studying at Hope University here in the city. It was their first visit to the beach, after more than a year of studying in Burundi. Scraping by in their little two-bunk room, hoping to make the most of whatever money they could scratch up from family members or odd jobs in Congo, they rarely had the time or money to hop on a bus for the 5km trip to the beach. Mostly they spent their time at the university library, or at the Centre Culturel Français, scribbling in their notebooks and talking about poetry, family, life.

Lucio, in the room he shared with Jean Marie and another Congolese friend in Bwiza

Jean Marie, rifling through paperwork from the university

I had met Lucio on a bus barreling along the Uvira road after a visit to the beach in December; he was on his way back from the DRC, and had hopped on the bus at the border. Since then he and Jean Marie have become as much a fixture in my Burundian life as morning coffee at Aroma, punishing workouts in my sweatbox of a gym at the Galerie Alexander, and that little kid with no legs and flippers for hands who hops around with a box between his teeth, soliciting passersby on the Ave. Prince Louis Rwagasore.

So we spent the afternoon shrugging off storm clouds and swimming in the lake, unaware that DISASTER would be totally avoided, but still kind of conspicuous in a creepy, near-miss sort of way.

Lucio zipping past the Brarudi brewery 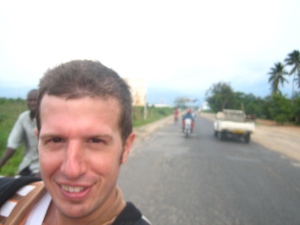 Inspired by 'Jersey Shore,' your correspondent tries the blowback look

Saga Plage is generally safe and pleasant, as African plages go. None of the killer methane bubbles that have been known to asphyxiate swimmers in Lake Kivu; none of the aggressive touts who molest you along the Kenyan coast. Gustave, the legendary killer croc who is said to have devoured hundreds of hapless villagers around Lake Tanganyika through the years, only puts in the rarest of appearances around Buja’s beaches. (You can check out the BBC’s recent Gustave documentary here.)

So having scanned the waters pre-swim and detected no signs of danger, I didn’t think twice about splashing around and giggling like a little schoolgirl in the tepid water. Jean Marie, whose submariner skills were on full display when we spent Christmas in Rumonge, ducked under the surface and swam far out to shore, his little head bobbing darkly in the distance. Lucio rocked a mean doggy-paddle. It was a beautiful day.

After an hour, with a cold wind whipping across the water, I decided to towel off. Jean Marie joined me on the beach, where a malnourished, three-legged mongrel hopped across the sand. Only then, with Lucio bobbing like a piece of driftwood offshore, did something dark, ominous, and vaguely hippo-like raise its hairy maw above water. I gave Lucio a panicky little hand signal to return to shore, not long before a Volvo-sized hippo rose to the surface, water spouting from its massive nostrils. Lucio scrambled back to the beach; I scrambled for my camera. What you see below will not at all SHOCK and AMAZE.

The horror! Something that sort of resembles part of a hippo, center-left

It cruised along like a patrol boat before vanishing beneath the surface. Minutes later it reappeared, showing off the sort of hairy, bug-eyed face that only a hippo-mother could love. We stood there on the beach having a there-but-for-the-grace-of-God moment. And if our myopic friend could have spotted our shivering bodies onshore, he might have been thinking, “There, but for the grace of God, goes lunch.” 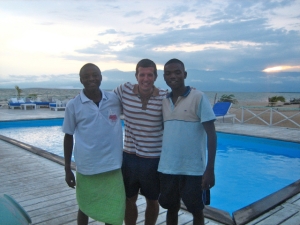 Greek to Me
Create a free website or blog at WordPress.com.