The mystery of the swimming cows.

Editor’s note: This is the seventh in a series of posts chronicling my travels in Rwanda and eastern Congo earlier this year.

In the morning, no signs of insect carnage in the restaurant. Walls that were covered with little black bugs and predatory lizards look as if they’d been scrubbed clean. The lake is calm, the sky is pale and cloud-covered. So begins the end of my first week on Lake Kivu.

At nine the restaurant is already full: a German couple, a French woman, two British women, an American. Then the Rwandans arrive: a church group, most likely, here for a conference or a weekend retreat. They’re a handsome crowd – close to a dozen men, a few women, all immaculately dressed, freshly laundered, ironed. Bless these Rwandans, who bring their formalities even to a lake retreat. They negotiate with a boat captain who’s offering trips across the lake. Probably the first price, the second price gets rejected. Negotiations are long, complex, informal. There is lots of laughter. A couple strolls off and whispers intimately under a tree. Some of the hotel workers have come over now, to join the negotiations. Everything is good-humored. A price is finally agreed upon. More laughter. Still, no sense of urgency. The men slowly, unsure of their land legs, board one by one. The women with their shoes in their hands. Life vests secured over their neat collared shirts and blouses, they motor across the lake. You can hear their laughter long after they’ve left the shore.

At the Presbyterian-run Béthanie, these weekend church functions seem to make up the bulk of the business. (Foreign aid workers, too, pale, petite American girls on weekend liaisons with their Rwandan boyfriends.) It is the closest they ever come, I suspect, to filling all these empty rooms. It is a beautiful compound, dozens of small villas swallowed by the vegetation. Outside my room is a papaya tree and poinsettias and a pine tree and a baobab. There are palms shaking their shaggy heads over the water, and birds everywhere. It’s as perfect as any place I’ve known in Rwanda.

In the afternoon, Andrea looking well-rested and stress-free, we have lunch in town: again rice and cabbage and a bowlful of sambaza. The girl who dishes our food cooks, cleans, serves, clears the tables. I wonder if Rwanda would grind to a halt without these sturdy, hard-working women. On the way into town we passed two women, young girls, hardly out of adolescence. They were carrying bundles of wood on their heads and babies on their backs and jerry cans in their hands. And still they greeted us joyfully. “Mirwe,” they said, their voices high and musical, as we wagged our hands in greeting. 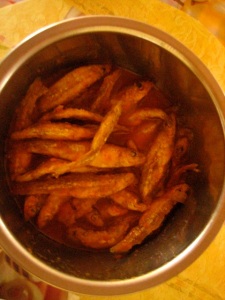 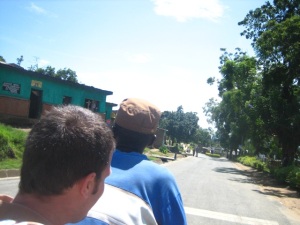 Back at the lake now, looking for a way to spend a warm and sunny afternoon. Down the road from the Béthanie is a new hotel, the Moriah Hill Resort; Andrea had seen them advertising a pair of well-maintained kayaks in the local press in Kigali. A little physical exertion, we decide, would be a welcome break from beers on the terrace at Béthanie. The walk to Moriah Hill is pleasant, too, down a scenic road framed by pines and palms – those incongruous pairings of Kibuye! – with water birds grazing their breasts against the lake’s surface.

Despite the changes in town, the health centers and shopping complexes, Moriah Hill is the only new tourist development I’ve found, nearly two years after my last visit to Kibuye. It is an arresting sight: a block of gray concrete, a strange, modernist (cubist?) box, so out of place amid the graceful contours of these Rwandan hills. No doubt this architectural atrocity, with its spa treatments and motorboat tours of the lake, charges executive prices to the Kigali elite who escape here for the weekend. Andrea and I – no executives, to be sure – frugally order a couple of beers from the restaurant. Then we rent a two-person kayak and put our muscles to work, paddling our hearts out until the Moriah eyesore is out of view.

It’s tempting to get carried away in a kayak: the sun-crested water, the islands strung across the horizon, etc. But our progress is slow – the islands in the distance refuse to budge, despite our paddling – and we decide to hug the shore, rather than setting some perilous course for open water. It is a beautiful afternoon. The hills are full of birdsong, and the shore is overhung with palm trees and tropical flowers. Even if the churches and the houses and the massive power stanchions of Kibuye never leave our sight, the calm and solitude of the lake makes it feel like seeing them through a thick pane of glass.

In a shallow cove we find the skeleton of a boat – an abandoned project by some local shipbuilder, perhaps, whose money had run out. To see it half-submerged in the water is like discovering some sunken Spanish galleon washed up onshore. It fills us with joy and wonder, and we lift our paddles from the water, as if to give it its due reverence as we drift silently by.

I’m using muscles I haven’t used in months, and there is a good, vigorous burn in my arms and chest. Andrea – an expert paddler in her day, full of stories of northern Ontario’s lake country – has excellent form. We paddle across a channel – storm clouds threatening over the hills – and draw a wide, lazy arc around a small island. Suddenly, a surprising sight: first one cow, then two, lowing and swishing their tails. It is like some small bit of magic – we’re hundreds of feet from the shore. Did some intrepid herder, desperate for land in the crowded hills around Kibuye, row them out to this deserted island to graze? Did they swim here themselves? Can a cow even swim? (It turns out they can – really well, according to Francine, the receptionist at Moriah Hill.) Mystery pervades their presence here. While the cows, unfazed by said mystery, unmoved by our curiosity, chew placidly at the hillside.

We round the island and steer back toward Moriah Hill. Now thunder is rumbling. Far out to the west, over the Congo, we can see a curtain of rainfall. Our muscles are sore, but we strain our oars. Sun spangles dance over the water. Somewhere far away, voices cry out from the hills. It is a beautiful feeling to exert ourselves like this, with the sun warm on our arms and faces. We put all our weight into rowing back to shore, knowing the storm clouds and the growing thunder are chasing us to the hotel.

After last night’s apocalypse, though, tonight’s rainfall is meek as a lamb. Back at the Béthanie the lake is beating against the shore, but the threatening, grumbling clouds surprise us with just a mild shower. It is a disappointment for Andrea, who had canceled her plans to leave for Gisenyi this evening. Instead she arranges a 6am wake-up call for tomorrow morning; if all goes well, she’ll be on the back of a moto and in Gisenyi by 9 o’clock.

I, meanwhile, have my own problems to worry about. During dinner I get a text from Aimable, whose moto “vient d’être prise” by the traffic police because of “retard des tax.” I’m not entirely sure what to make of this – retard tax? – but the point is clear: I’m on my own for the trip to Cyangugu. It’s a headache I was hoping to avoid; tomorrow is a Sunday, after all, hardly the time to be making convoluted travel plans in pious, Church-going Rwanda. Andrea, though, is sanguine: she’s sure something will come together in the morning. I decide to show some faith, too: if nothing else, three years of traveling in Africa have taught me that things always work out in the end.

But never the way I’d planned.

2 responses to “The mystery of the swimming cows.”