Knives and handouts: the story of Africans abroad.

Terrific thunderstorms last night in Burundi. Spent about 20 minutes sitting by the window, trying to catch lightning in a JPG. Managed this very pedestrian effort, which is only cool in as much as it shows that the whole freakin’ sky was lit up for as long as a very long breath:

This not being a town that does too well in torrential downpours, the streets were quickly, characteristically flooded. Not surprising, as the rain in Burundi tends to be of the Biblical and shit-kicking variety. (E.g., “No fewer than 717” houses in Buja were destroyed by floods in November.) 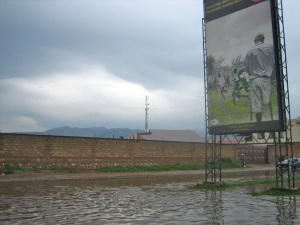 Meanwhile, my award for African Diaspora Story of the Week goes to a plucky piece in today’s Telegraph, “African carried out knife crime because he hated Britain and wanted to go home.” The African in question just happens to be a Burundian native, which prompted the stellar lede: “An immigrant carried out a knifepoint mugging in the hope he would be sent back to his war-torn African homeland because he hated life in Britain, a court has heard.”

The story of 21-year-old Kasiba Misigaro – who we are told, four words into the story, “was living off benefits” – is full of a certain tragicomic pathos. The clumsy scheme to mug “another African” (no nationality given) in the hopes of being deported sounds as ill-conceived and doomed-to-fail as a Burundian presidential run. Despite the defendant’s woeful protestation to the police – “I only did it because I wanted to go home. I don’t want to be here.” – he was sentenced to three years in prison (taking into account a whopping 21 priors), at which point his wish to return to Burundi will unceremoniously be granted.

The Daily Mail offers an almost identical story, worth perusing for the hysterical timbre of the comments at the bottom. (Sample: “Christ here’s one who wants to go home…why the hell are you keeping him…” Merci, Edouard in Toulouse!)

It also includes the following frightful representation of what a hypothetical mugger might look like, should you encounter one in, say, east London. (Q: Couldn’t find a black model?)

Not to be outdone, the Sun reports in a similar vein, helpfully identifying Burundi as

one of the ten poorest countries in the world, with the lowest GDP per capita on the planet. It is ridden with civil wars, corruption, poor education and AIDS.

They, too, provide a terrifying stock photo of a (white) guy with a knife.

Caution: Muggers are blacker than they appear

I can’t exactly fault a couple of right-wing tabloids (and the more credible Telegraph) for reporting this story the way they did. (Would my hometown News or Post have done it any differently?) And if I were a tax-paying Brit who helped pay this kid’s benefits – AND had to pay for his three-year imprisonment on top of that – I’d probably be a bit peeved, too.

What I can’t exactly bear, though, is the implication that there’s something wrong with this guy wanting to go back to what is, ultimately, his home. Note the incredulity of each of the authors below:

The Mail: [Misigaro carried out the attack] “to be deported back to a war-torn African country – because he found Britain worse than his homeland.”

The Sun: [The mugging] “was the only way he could get a free ticket OUT of Britain and back to his war-torn homeland.” (Their emphasis on OUT.)

The Telegraph: [He] “believed he would have a better life back in Burundi, one of the ten poorest countries in the world.”

Imagine! Leaving the stiff-lipped comforts of civilized Britannia for the savagery of his war-torn homeland! As one commenter put it: “I hope he does get back to wherever he come from and tells everyone how he hated it here.”